Ideogram: figure with big mouth looking up and 'split'
attribute: Lake or marsh 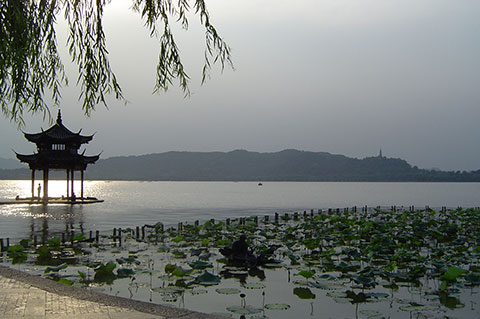 Glad, joy, give joy, explain, open up (- a passage), loosen, to exchange, to barter, weaken (wine) by adding water, to weigh, straight, to permeate.

A man with a big mouth and to split or divide.

With the radical 'words': to speak, say, tell, talk, scold, -ism, theory, view, influence, persuade, halt (stay), take pleasure in, to number, to take off (in hex.4.1). With radical 'heart': happy, joyful.  In the MaWangDui YiJing it is Duo, letting escape a bird out of the hand. Lose, but also take away, rob.

Lakes and marshes are places of fishing and hunting, of recreation and competition. They can be shallow or deep. Sometimes even reach into the realms of gods and spirits in their underground lake-palaces. Temples were often built at the side of lakes, disciples were initiated with its waters, the stars were studied. The Great Yu built a watchtower in the marsh of Hia.

"The Open brings about pleasure"

When creatures are open to their surroundings, they can enjoy the world. Being awake, aware, exchanging, giving, receiving, loving.

"The forces of mountain and lake are united in their action"

The most used meaning of dui is open up, loosen, passages and openings. It is the opposite or complementary of gen, mountain, which wards off, defends its own uniqueness. Dui can be influenced and wants to be. It is the entrance to the depths of the earth, and in living creatures the entrance into the depths of the soul. Through dui the unconscious can be reached and influenced, or one can hear or speak its messages. "Dui manifests itself in the mouth." Dui is the door through which fluid interaction is possible. It is the place where people meet and exchange, where they laugh and fight and love together.

A lake symbolizes exchange between people, the pool of wealth, knowledge or concord between them, the way they mirror each other. A marsh is a symbol of fertile growth, of new life. Transactions, shared joy, all actions between two or more people need dui. But also in one single person, for all feelings one needs the openness of the soul, one cannot feel joy or sadness without this passage. Unity includes limits and rules. Limits are the prerequisitory for society, the background of exchange. Through Dui one can understand their necessity.

"Dui is the lake, the youngest daughter; it is a sorceress; it is mouth and tongue"

Quietness is the mother of movement. When the mind is quiet and clear like a lake on a calm day, one can reflect the light, or one can look into the waters of the soul, and see its creatures. When there is movement around, one answers to the winds and rains and creatures, supple and without any restriction, open and genuine.

Lake "comes together with friends for discussion and rehearsing".

When Lake is INNER (lower) trigram it brings interaction and an open mind to everything which is expressed through the outer trigram.

In 10 the powerful order of Heaven (The noble one discriminates between high and low. He gives the ambitions of the people the suitable position)
In 19 the generous space of Earth (The noble one teaches and ponders inexhaustibly, he tolerates and protects the people without limits)
In 54 the energy of Thunder (The noble one through the eternity of the end understands the transitory)
In 61 the influence of Wind. (The noble one discusses criminal cases in order to delay executions).
In 60 the reshaping power of Water (The noble one delimits number and measure and deliberates upon ethical conduct)
In 38 the clarity of Fire (The noble one is similar and yet different).
In 41 the conscientious individuality of Mountain (The noble one controls anger and restrains passion)
In 58 the reflection of Lake (The noble one comes together with friends for discussion and rehearsing)

When Lake is OUTER (upper) trigram it expresses the inner trigram into a reality, which is open to its surroundings and answers to them.

In 43 the powerful order of Heaven (The noble one gives a salary to those below, he stays in virtue and so aloof)
In 45 the generous space of Earth (The noble one puts weaponry out of sight and is alert for danger)
In 17 the energy of Thunder (The noble one, towards nightfall, goes inside to eat and relax)
In 28 the influence of Wind (The noble one stands alone without fear, retreats from the world without melancholy)
In 47 the reshaping power of Water (A noble one incurs fate on fulfilling his aspiration)
In 49 the clarity of Fire (A noble one, by regulating the times, makes the seasons clear)
In 31 the conscientious individuality of Mountain (The noble one receives people by emptiness)
In 58 the reflection of Lake (The noble one comes together with friends for discussion and rehearsing)