From Gui to Gua

the origin of the hexagrams??
Playing with an idea

The ancient sundial of the Zhou was a Guibiao. A tablet, gui, which was at one end round, at the other end straight. At the round end a biao, a gnomon, which cast a shadow, longer in winter, shorter in summer. Midwinter is moon 10, the shadow goes across all lines. Midsummer is moon 4, hardly any shadow.

Moon 5 looked exactly like moon 3, with one line broken by the shadow. If you make a record about which moon you are referring to, it is easier to write one of the two upside down. It stays the same picture, but the difference is easy to see. At the same time this way of writing them makes a logical sequence. The light creeps up, then the dark, and then the light again.

The next step is trying to divine when something will happen. Cast coins, or draw sticks out of a bunch with shorter and longer ones, or count beans or any other way to decide how many whole and how many broken lines come up. You will have to find a way to decide which come first, the whole or the broken lines. But then it will clearly indicate a month.

In hex.19 it says "when the 8th moon comes - pitfall". The 8th moon is the 'upside-down' of hex.19: hex.20, contemplating.
Bradford Hatcher put me on the right track: hexagrams and calendar were connected since old times. I found the following text in his book (in the part 'Dimensions', search for “8th” and you hit right upon it).

“Most of the elaborate associations of the Yi with the Chinese calendar first appeared in the Yiweishu in the Early Han. The development of the Shi Er Yue Gua, in the order of the 12 Moons, is attributed to Meng Xi (1st cent. BCE) by Yu Fan (164-233) (Fendos, p. 406). The pairing of the 12 Branches to the 12 Lines of Qian and Kun and a system known as “Internalizing the 12 Branches” is attributed to Jing Fang (77-37) (ib, p. 370). However, the Chinese had developed their 12-month calendar long before the Zhou Yi was composed. Further, the references to the coming of the 8th Moon at Gua Ci 19.0 (Lin is the 12th Moon, the 8th’s Inverse), the reference to the coming of solid ice at Yao Ci 02.1 (Zhi Gua 24) and the association of Gua 24 to the Winter Solstice in Da Xiang 24.X all suggest that a system of assignments was both in place and a part of the Zhou Yi and Wing composers’ thought processes.”
(Gua ci is the image, yao ci is line-text and zhi gua is relating hex)
Obviously the Tidal Gua (the combinations of moons/months and hexagrams) are very old.

Two days ago I had jumped up because of “the 8th moon”, it suddenly explained this enigmatic sentence in hex.19.

This afternoon (Oct.19, 2002) at 1.30 I suddenly combined things, and at 3 o’clock I had made photos and put them on my website. I had cut strips of paper and a little bamboo stick acted as gnomon. In Ricci it says (shortened): "GUI: measuring tablet, 15 寸 (cun, inch) long, placed horizontally North-South, at noon the shadow of a gnomon of 8 尺 (chi, feet) high at the extreme south end fell on it. Tablet of jade or ivory, the top round, the bottom square, given by the emperor to the new princes as token of their power or to envoys as credential. Several measures of capacity".

One problem: the hexagram with all lines broken, 2, is not the moon of winter solstice, but the moon just before. Maybe winter solstice, and especially its celebration, is associated with the return of the light, with hexagram 24. There the judgment says: "the kings closed the frontiers at sun solstice". Hex.2, the bottom line, talks about hoarfrost, which comes usually many weeks before winter solstice. Of course on the gui, hex.2 is the exact moment of winter solstice. But the month of midwinter reaches from Dec.5 to Jan.5 (approximately), and includes the first lengthening of the days. So it is not at all illogical to take hex.24 for this month, and hex.2 for the preceding one, when the days only become darker. This might explain the one-moon shift of the hexagrams. 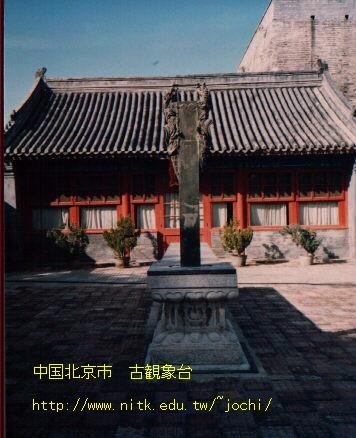 8 chi Gnomon, Beijing Ancient Observatory, China. It is difficult to see the markings, but it seems there are many lines. Lots more than six. 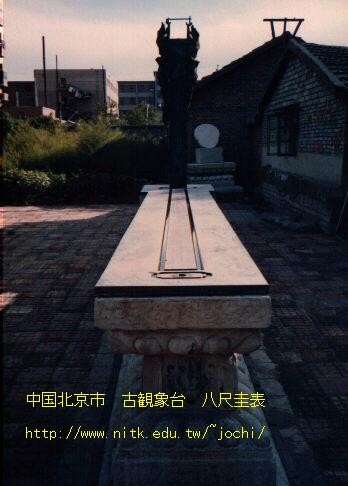 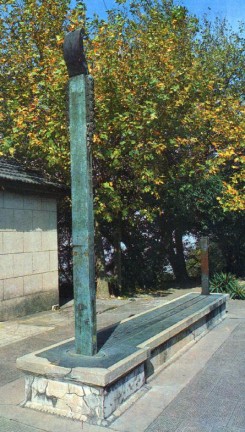 Look at this!!! In this website, "Chinese Fortune Calendar" the TaiQi symbol is explained.

I knew that the character for hexagram, gua (actually diagram, it also indicates trigram etc) is a picture of a sundial (a gui) with the radical ‘divining’ added. On the old picture of the character it looks very much like a pile of lines. It is two times the character for ‘earth’, one on top of the other, but maybe originally it was not a picture of earth. Very often characters which resembled each other are later drawn the same.

The development into divining must have been very natural. A moon (month) could be indicated by a number of whole and broken lines, so it was calling for a divination method to find a moon. Finding the number of whole lines by counting pebbles or whatever, and the broken ones ditto, or some other way, but it was not difficult to devise something.

Then the next evident step is making a system together with the other combinations of lines, resulting in 64 different possibilities. When I see how many people are intrigued by the mathematical possibilities of the light and dark lines combinations, and how clever they are in finding systems, then I am convinced that in those old days some Wu had this same obsession.

This is just my own idea, and there are many facts speaking against it. I will put everything I can find side by side on this page.

The tidal gua and the moons, the TaiJi symbol
Searching for the origins of the gui-biao

The sundial, how does it work

A little fantasy story about the origin of the hexagrams

Gui day today – the Wu is wearing her animal mask and all her feathers and bells. She will perform the ritual for the next ten-day period. The whole village is sitting in a circle around the ritual space where she will dance. Strings are attached to a long pole, horizontally shutting off one end of the dance-floor, and at every string a chicken hangs upside down. They are the payment for the gods, and also for the Wu, because gods and Wu always share everything.

They need to know if the weather will be steady in the coming period. Do they have to hurry to get the harvest in? Or is it better to wait until the next period? For the crop waiting would be better – but if a storm comes, it might destroy everything. It is an important decision.

The Wu dances in circles, faster and faster, shaking her bells, and also shaking the big pumpkin with beans. Big flat beans, six of them, one side painted black, the other side white. Through a hole in the pumpkin the gods make the beans fall out, one by one. Everyone watches them flying, so they will know where they fall.

Exhausted the Wu falls prostrate on the floor. Nobody moves, in silence they wait until she comes back on earth again. When she finally opens her eyes and raises her head, she looks around until she sees one bean. A white one, the gods are telling her to start with the white ones. She collects them all, sits down cross-legged and puts them in a line, starting with the white ones, and then the black ones. Three white, three black. Everybody smiles, they know what this means. It is the moon of spring, when the cold of winter and the hunger are over. When the rains start, and when the first fresh greens can be collected. The crops start to grow. It is usually the most happy period of the year. This means the weather in the next ten days will be fair, and the harvest can wait. The crop has another chance for growing, it will be bigger.

But then suddenly one of the chicken manages to wriggle her leg out of the string. Screeching she runs across the dancing space. This cannot be anything else than a very bad omen. Everybody is looking anxious at the Wu now. She sits in deep thought, trying to grasp the meaning of what happened. The beautiful picture of the spring moon is scrambled and one of the beans has even been turned over.

Very softly she begins mumbling words about storms and darkness and misfortune.

Nobody can sleep that night, and the next day they all start the harvest. Not with songs and laughter this year, but filled with fear. Never before they managed to bring in the crop so fast, and they are just in time. Big black clouds move in faster than they ever before saw clouds move across the sky, and within minutes the most severe thunderstorm is raging. Even the old people cannot remember such dark and awful weather. The clouds are so black and thick that it is as if the sun is down. The whole day and most of the night the earth is trembling by the thunder and the terrible rains. The next morning the sun rises bright in a crystal-clear sky. The entire village is greeting her, laughing, crying, all talking and singing.

The Wu looks in her thoughts to the picture of the scattered beans. White-black-white-black-black-black. It engraves itself into her mind. She will remember forever what this image means ...